29 August 2018. In light of recent media attention to Canada’s broken system for allocating visas to international scholars, the Canadian Association of African Studies (CAAS) is adding its voice. CAAS organises a conference at a different Canadian university each year. The 2018 conference at Queen’s University was a great success. Yet every year, African scholars are denied visas to travel to Canada. In 2018, 10 individuals, from South Africa (1), Ethiopia (4), Cameroon (2), Nigeria (2), and Togo (1) were refused visas. Six African graduate students were denied visas in 2017 (two in France, two in the US, one in Germany, and one in Austria).

For Canada-based researchers to be part of collaborative knowledge production about Africa, we must enable the participation of Africa-based colleagues in our conferences. Africa-based researchers’ perspective and proximity to empirical data enriches our scholarship. The Trudeau government has decided to renew Canada’s prominence on the international stage, notably by sending the first “return to peacekeeping” contingent to Africa. Canadian government representatives attended the CAAS conference at Queen’s, seeking insights prior to the deployment in Mali, which highlights the relevance of CAAS conferences for informing Canadian policy in Africa. Yet scholars presenting on terror attacks in Nigeria and political developments in Zimbabwe were among those denied visas. The Canadian government needs African researchers’ expertise for its operations in Africa to be successful; it is vital for these scholars to visit Canada. Canada also provides development assistance to African countries; Africa-based researchers’ contributions on continental development would be invaluable.

Several scholars gave their permission to share testimonials on the professional and financial impact of visa refusals. The 2018 visa application by a Zimbabwean PhD student at North-West University, South Africa, was rejected on the basis of his travel history. The student reapplied, clarifying that he was in South Africa legally on a study permit, but was rejected again. The PhD student paid 1000 South African Rand for each application. A Togolese PhD candidate at Selçuk University, Turkey, requested a visa in 2018. The reason given for refusing his visa was concern that he would not leave Canada. Yet he has travelled to several countries and left on time. As a PhD candidate and the recipient of a scholarship from Turkey, he has a Turkish residence card. He also provided a bank statement showing a balance exceeding the amount needed for his stay. He paid $100 CAD in visa fees. Sakine Ramat Grena is a Chadian citizen. In 2016, Sakine spent about $600 CAD on a visa application, which did not include travel from Chad to Cameroon. A friend at l’Université de Montréal had reserved accommodation. Yet Sakine’s visa was refused on the grounds of insufficient funds. Sakine chose in 2017 to travel to France instead for a conference.

These obstacles have already begun to deter African scholars from visiting Canada. Canada is on a mission to become a leader in the world’s information economy. SSHRC and the Royal Society of Canada understand that to reach this goal, knowledge diffusion and international collaboration between Canada-based researchers and scholars abroad must be facilitated. Issuing visas is one small step to enable greater international exchange among researchers in African Studies, which will have a remarkable impact on the promotion of knowledge about Africa in Canada.

CAAS urges Canadian policymakers, particularly the Honourable Ahmed D. Hussen, Minister of Immigration, Refugees and Citizenship and the Honourable Marie-Claude Bibeau, Minister of International Development, to give these issues serious consideration. We encourage Immigration, Refugees and Citizenship Canada to engage in a process of consultation by convening a working group bringing together Canadian academic and non-profit organisations that regularly invite guests from Africa and other parts of the world; ensure that the visa granting process is transparent, fair, and nondiscriminatory; and verify that the application of criteria across different embassies and consulates is standardised. 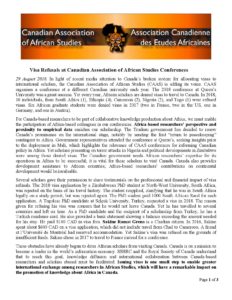 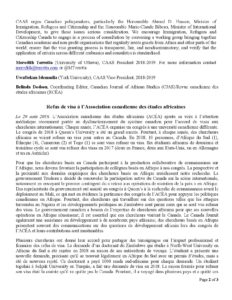